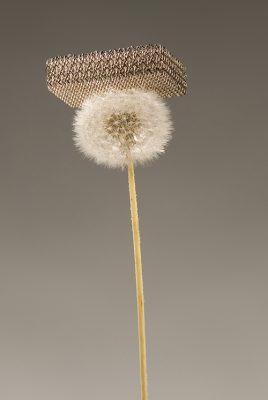 Researchers from HRL Laboratories are among the honorees of Popular Mechanics’ 2012 Breakthrough Awards for their development of ultralight microlattice materials.

Drs. William Carter, Alan Jacobsen and Tobias Schaedler will be recognized during a ceremony October 4 at the Hearst Tower in New York City. Breakthrough Awards are presented annually by the magazine to “innovators whose work will transform the world in years to come.”

The researchers’ innovative “microlattice” architected material and the novel fabrication process developed at HRL to produce it was first announced in 2007.  Demonstration of ultralight metallic microlattices was published in the November 17, 2011, issue of Science.

The iconic image of a super light metallic microlattice material atop a tuft of dandelion shows the dramatic possibilities offered by the microlattice fabrication process developed at HRL. With a density of only 0.9 mg/cc, the material developed in 2011 was at the time the lightest ever, approximately one hundred times lighter than Styrofoam™.  Its unique “microlattice” cellular architecture consisted of a lattice of interconnected nickel tubes with a wall thickness of 100 nanometers, 1,000 times thinner than a human hair.

Since their 2011 announcement, the HRL researchers have been investigating the numerous potential uses for ultralight microlattice materials. By modifying the cellular architecture—for example, the wall thickness, tube diameter or cell size—a wide range of densities and properties can be achieved. Exceptionally high strength and stiffness per weight can be reached, and the unique lattice structure enables unprecedented mechanical behavior for a metal, including complete recovery from compression exceeding 50% strain and extraordinarily high energy absorption.

The HRL researchers attended the Breakthrough Conference, during which Dr. Carter will participate on a 45-minute panel on “The Innovation Economy.” The Breakthrough Awards were presented that evening during a reception and dinner.