In a leap of engineering ingenuity, researchers at HRL Laboratories, LLC, have utilized a self-propagating photopolymer waveguide process to form ultra-thin sandwich structures that could provide a platform from micro-unmanned aerial vehicles (micro-UAVs). 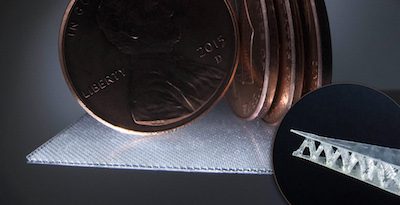 Roper said that, because traditional methods of making sandwich structures do not scale down to the thickness and densities need for micro-drones, “The HRL researcher team was challenged to do more with less.” Rising to the occasion, the researchers demonstrated a fabrication process for making microsandwich structures with areal densities from 0.04 g/cm2 down to 0.005 g/cm2 – roughly the thickness of a quarter, but 97% to 99.6% lighter.

“These low densities are impossible with traditional sandwich structure fabrication techniques because the weight of adhesive would be greater than the weight of the facesheet and core it was holding together,” said Roper. Instead, researchers employed HRL’s photopolymer waveguide microlattice material so that the microlattice core did double duty as both the adhesive and the core.

Looking to the future, Roper noted that microsandwich structures could potentially be used in the wings or propellers of insect-like robots or other micro-UAVs. “Micro-drones could facilitate scientific research or enable infrastructure inspections,” he said. “After a natural disaster, they could even travel through hard-to-reach areas to search for survivors.”