The U.S. Department of Homeland Security Science and Technology Directorate has awarded HRL Laboratories, LLC, $2.2 million to develop technology that is capable of continuously confirming that the person operating a mobile device is the device’s authorized user. HRL’s Information and Systems Sciences Laboratory, in conjunction with its Microelectronics Laboratory, will create this new mobile device authentication technology. 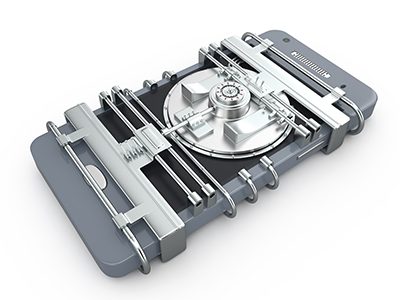 According to HRL Research Scientist and Principal Investigator Dr. Vincent De Sapio, “We’re planning to use a low power ‘brain-inspired’ system that learns online and that classifies user behaviors to identify when a potentially malicious party obtains physical access to the device.”
De Sapio says that the goal of the project is to create a device capable of capturing a user’s behavioral patterns, which are inferred from the device’s inertial, touch, and other sensors. If the front-end neuromorphic system identifies anomalies between the authorized user’s previously learned behavioral patterns and the patterns of the person operating the device, it sends an alert to an early warning system.

“The early warning system has two stages,” De Sapio says. “Locally, the device detects and classifies anomaly signatures, while the back end correlates historical use patters to filter out false alarms.” A risk signal is sent to the mobile device, which then triggers a re-authentication protocol. “If it’s an unauthorized user, the device is disabled,” he says.

The HRL research team plans to work with Boeing to implement the DHS sponsored authentication capability into a secure mobile solution. “If successful, this will represent a breakthrough approach to mobile device security by detecting anomalies in users’ behavioral signatures,” De Sapio says.