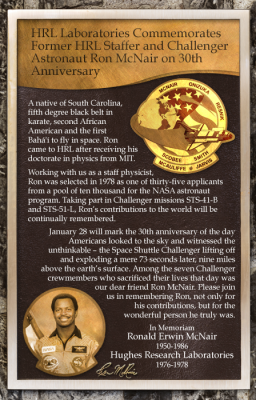 A native of South Carolina, Ron came to HRL after receiving his doctorate in physics from MIT. David Pepper, a senior research scientist who retired from HRL Laboratories in 2004, recalls, “When Ron first came to HRL space was limited, so we actually shared a desk for a short time.” Little did Pepper know that physics was only one of his desk mate’s many talents and interests.

According to Richard Forber, a former HRL senior staff research project manager, Ron was a fifth degree black belt in karate who taught the martial art to his MIT mentor, Michael Feld. “They developed the physics of karate along the way,” he said. Their research was published as a paper in Scientific American in 1979.

Pepper recalls Ron’s HRL colloquium on the physics of karate. “I had zero idea that this soft-spoken, gentle man was a black belt,” he said. “After giving a talk involving his calculations and modeling of the martial art, he did some amazing demonstrations in full karate garb.”

Tobyann Mandel, who was librarian during Ron’s time at HRL, recounts both his martial arts skill and his generosity of spirit. “Ron heard that I had gotten mugged,” she said. “I wasn’t really hurt, but Ron came down to teach me a few moves for the next time. We could have put on quite an exhibition.”

In 1976 and 1977, Ron collaborated with former HRL Principal Scientist and Section Head Marvin Klein on a government-sponsored project related to laser isotope separation. “Ron was very hard-working and ambitious,” Klein said. “He told me from the beginning that his dream was to become an astronaut.”

Ron was thrilled to be chosen for the NASA program in 1978. Retired HRL Principal Research Scientist Steve Wandzura recalled, “In celebration, Ron and his wife, Cheryl, bought a new Volvo.” Wandzura also reminisces about the time that he accompanied Ron and Cheryl to the Rockwell factory in Downey, where one of the shuttles was under construction. “I told him that, as an astronaut, he could get flight training in a T-38 – the USAF supersonic trainer version of the F-5,” he said. Although Ron demurred, saying that doing so might delay his first space mission, “He did get me a copy of a T-38 flight manual, which I still have.”

Ron flew as a mission specialist on Challenger’s fourth flight, in 1984. “After his flight, Ron came back to the Lab and gave a very interesting account of the mission,” said Hugh Garvin, a staff scientist at HRL from 1963 to 1997. “He had a tray with a number of white mice that he was to study under weightless conditions. The tray was secured in a cabinet during lift-off and the attainment of a stable orbit. When he finally had a chance to pull out the tray, he was shocked to see every one of the mice floating in the tray and apparently dead.”

Garvin recounts Ron saying that he didn’t know how he would justify the total failure of his experiment. “But, after some time, Ron noticed one of the mice twitching,” he said. “Eventually, more of them stirred. Apparently, the weightlessness had lulled them into a deep sleep, but they were still alive in their tray and he was able to complete his observations.”

Pepper recalls that, during Ron’s talk, the former HRL physicist revealed his love of the saxophone. “He brought his saxophone aboard the space shuttle and would play in his spare time,” he said. “Ron’s photo showed him floating around in the shuttle, sax in hand, playing some tunes.” Wandzura was also aware of Ron’s musical interests, but said, “I remember going to hear him play sax at a club in the West Adams district. Like me, Ron made the right decision to go technical rather than to pursue a career in music.”

The outpouring of remembrances from HRL Laboratories’ current and former staff members reflects both the high regard in which Ron was held and the deeply felt sorrow that his life was cut short. HRL Laboratories continues to honor Ron’s memory in “The Shuttle Room,” a commemorative conference room that displays an American flag and Challenger patch from Ron’s first flight, and a memorial plaque that includes Ron’s quote, “Before you can make a dream come true, you must have one.” Said Ron’s collaborator Marvin Klein, “I am glad he could achieve that dream, even if it had a tragic end.”