HRL Laboratories, LLC, researchers have developed a reversible alkali atom source that runs at low power and low voltage, which is beneficial in applications such as smaller, more efficient, and ultimately portable atomic clocks that use cold atoms. The research on the device was published online June 13, 2017 in Applied Physics Letters. 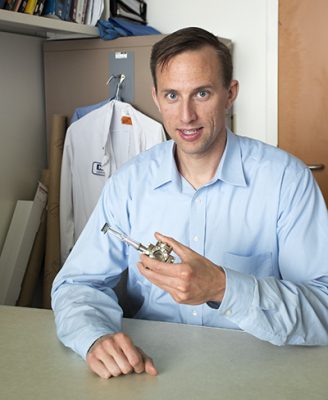 “There are two basic types of atomic clocks, some operate at room temperature and some use atoms cooled down to just above absolute zero,” said Chris Roper, HRL’s project leader and senior author on the paper. “Scientists have managed to miniaturize room temperature atomic clocks, but cold-atom atomic clocks are much more accurate, so DARPA would like to have miniaturized versions of those too. The problem is that cold-atom clocks come with a whole host of added difficulties. Our device is a big step toward solving many of those problems.”

The HRL device could enable lighter weight platforms with fewer batteries or longer duration missions. To operate at temperatures near 100 microkelvin, it is necessary to capture a subset of atoms from a warm vapor—a vapor of the alkali element rubidium in the HRL device—and cool them down. The cooled atoms are trapped, and the more background warm atoms there are in the chamber, the weaker the signal-to-noise ratio is for the cold atoms, which reduces device accuracy.

The HRL device uses materials originally developed for batteries to remove only the warm rubidium atoms. This will reduce measurement noise and increase accuracy when integrated into a cold-atom clock. It will also keep the cold atoms cold for longer,   enabling greater accuracy in atomic clocks, especially at higher operating temperatures.

“Our device can be integrated in a platform with smaller batteries because it uses much less power than traditional rubidium sources and it is reversible, depending on the polarity of the voltage applied, so it works as a source or a sink,” Roper said. “Our research is continuing and we’re very excited about our results thus far.”

Other HRL scientists who were authors on the paper were Russell Mott, Logan Sorenson, and Matthew Rakher. Songbai Kang, Kevin Gilmore, Liz Donley, and John Kitching from the collaborative team of the National Institute of Standards and Technology also were authors.

This material is based upon work supported by DARPA and the Space and Naval Warfare Systems Center Pacific (SSC Pacific) under Contract No. N66001-15-C-4027. Any opinions, findings, and conclusions or recommendations expressed in this material are those of the author(s) and do not necessarily reflect the views of DARPA or SSC Pacific.