Kayleigh Porter works in HRL’s Architected Materials Department, part of the Materials and Microsystems Laboratory, as an expert in ceramic 3D printing. Her lab has been buzzing of late due to her colleagues’ knowledge of her previous job, during which she 3D printed ceramic parts that ended up on NASA’s Curiosity Rover, currently exploring the surface of Mars.

“We were asked by NASA Goddard Space Center to print a part for them because they couldn’t find anyone else who could do it for them at the time,” Porter said. “We called it the NASA oven. It’s about a one-inch tall by one-inch diameter heater housing with really long, thin-walled, 20 millimeter holes going through it that couldn’t be machined in any ceramic material. It is part of an instrument suite on the Curiosity called the Sample Analysis at Mars or SAM suite.” 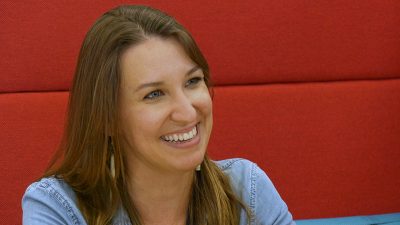 Porter said her team was able to 3D print the housing and hit all the tight tolerances NASA required. Eventually about eight of their ovens were installed on the Rover that went to Mars.

“Later we made some more because they were getting some interesting results and wanted to test the heater in simulators on Earth,” Porter said.

Recent findings of organic chemicals on Mars have shone a spotlight on the SAM suite. SAM was used to identify organic molecules in mudstone samples gathered into the ceramic oven, which heats the sample to about 500 degrees Celsius, which released the organic molecules from the powdered rock. This discovery was not proof of life on Mars, but it is an indicator that life might have been possible on Mars around a billion years ago and shows promise for future Mars mission discoveries.

“It’s been exciting at various times over the last few years to have a part I helped make on the Curiosity. A few years ago they discovered chemically bound water and our team was interviewed about our work. The latest discovery has brought the instrument back to the forefront, and it is very gratifying to know I had a small part in a great adventure in science.”

Porter took an unusual route to working in research and development with HRL Laboratories, having started with a bachelor of fine arts degree in ceramic art from the Maryland Institute College of Art in Baltimore.

“After finishing my degree I got into ceramic 3D printing at a small research and development company in Millersville, just outside Baltimore. I started as a technician mixing the resins, then I moved up to learning about the formulation and all the details of how to make ceramic 3D printing actually work. I learned on the job to become a lead development engineer when we got the call from NASA.”

Victor Ardulov is a doctoral student and HRL intern working in ISSL. As an undergrad, Ardulov worked as an intern at NASA’s Jet Propulsion Laboratory on a virtual reality tool for mission planning and the Mars science team, a big part of which was linked to the Curiosity Rover. “We were looking to develop a 3D model of the Curiosity Rover in the 3D environment that allowed us to predict whether or not an action taken by the Rover was going to be dangerous.” 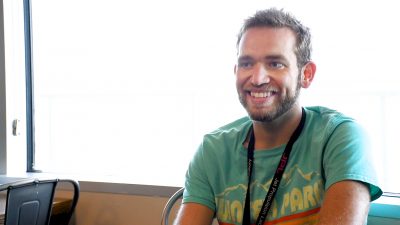 Exploring with a rover mock-up in 3D enables the tactical planning team to model rover actions on Earth before signaling for the rover to do them on Mars.

“A lot of my work was in the Mars yard with the people running the full-scale rover mockup. I was collecting telemetry data on the exact position of each joint on the rover and some passive sensors that measure its orientation.” The Mars Yard is a courtyard at JPL retrofitted with sand and rocks to simulate mars, and a garage where they keep the rover duplicate.

The experiences of Kayleigh and Victor crossed over when the Curiosity sample collection arm suffered damage on Mars. A drill on the arm broke and sample collection into the ceramic oven was stopped for nearly 2 years while a work-around was devised.

“A shaking motion was sometimes initiated to clean the collection arm,” Ardulov said, “The team realized that instead of putting things directly into the sensor they could put the arm in a position to use that same shaking motion to drop samples into all the different instruments on the arm, including the oven.”

“The Curiosity Rover is the height of a bus. So I would watch this giant arm moving around, actuated by fairly large motors, doing that subtle back and forth motion. It could be scary trying maneuvers the rover wasn’t necessarily designed for. It’s a weird experience watching it just wiggle back and forth, but it drives home how complicated these systems are and what a huge engineering feet the rovers is.”