Capturing A Genius: The Feynman Lectures 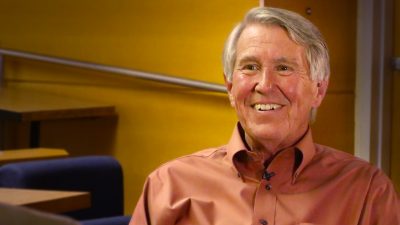 In 2008, John Neer retired from an industry career of over 50 years in commercial, military, national security, civil, and international aerospace programs, in which he specialized in satellite guidance, navigation, and control systems. Upon his retirement, the National Reconnaissance Office, which is the US intelligence agency in charge of reconnaissance satellites,   awarded John the prestigious superior service medal for “…superior leadership and technical acumen in the development and operation of multiple NRO programs. Specifically, his engineering expertise advanced the state-of-the-art for satellite communication, imagery, and ground processing capabilities and operation.”

John started his professional career at Hughes Aircraft Company in Los Angeles in 1966, where he participated in 5 years of lectures given by Nobel physics laureate Richard Feynman at the Hughes Research Labs (now HRL Laboratories) in Malibu, CA. John has now made his fascinating lecture notes available free to the public online at thehugheslectures.info and joins us to talk about the Feynman lectures and how they affected him.